CINÉ-RENCONTRE From September 26th, 2019 to June 11th, 2020 Each month, your cinema l'Eden proposes evening-debates animated by Frédéric VOULYZÉ around an art-essay film. These sessions will be an opportunity to discuss, discuss a work and get the analysis and lighting of a film professional. Frederic VOULYZÉ Frédéric VOULYZÉ is co-director of Télé Center Bernon. Télé Bernon Center (TCB) is an association under the 1901 law that has been working for 30 years in the field of image and vision education. Located in Epernay, TCB conducts audiovisual practices workshops (animation, reporting, fiction) and training related to National Education, leads debates in cinemas, initiates innovative actions in the field of disability ... is to propose a reflection on the media and a decryption of the image. TCB accompanies the various media and their mutations: from the Cinema to the Video Game by way of Internet and Television. TCB coordinates for the Champagne-Ardenne (Great Eastern Region) the devices: PASSPORT IMAGES since 2004 LYCEANS AND APPRENTICES IN THE CINEMA since 2012 and Le Blackmaria, Regional Pole of Image Education since 2018. AT YOUR AGENDAS! September 26th at 8pm - Parasite of Bong JOON-HO October 17th at 8pm - The city of fear of Alain BERBERIAN November 21st at 8pm - Young Shepherdess of Delphine DETRIE December 19th at 8pm - Miraï, my little sister of Mamoru HOSODA January 23rd at 20h - The salary of the fear of Henri-Georges CLOUZOT February 13 at 20h - The brilliance of Yvan ATTAL March 19 at 20h - Girl Lukas DHONT April 30 at 20h - Look for the wife of Sou ABADI May 28 at 20h - The brothers SISTERS of Jacques AUDIARD June 11 at 20h - The wind rises from Hayao MIYAZAKI 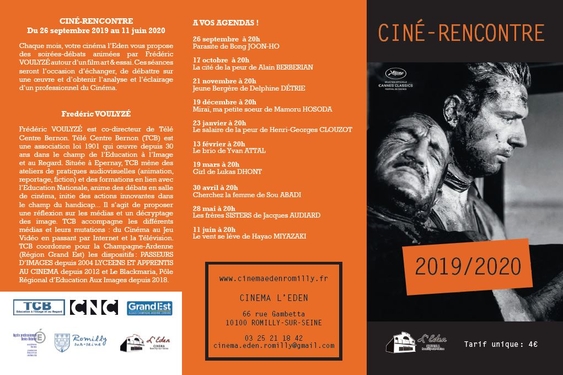